The long wait is over, and the excitement has just begun.

Tua Tagovailoa made a strong showing in his rookie year with the Miami Dolphins, quickly proving why he was so highly regarded coming out of college and providing hope for other lefthanders who want to be NFL quarterbacks.

​The Best Lefthanded Quarterbacks of All-Time​

For more than three decades, from the rise of Ken Stabler in early 1970's
through the prime of Michael Vick and Mark Brunell in  the mid-2000's,
there has always been at least one lefthanded starting quarterback in the NFL.

​Other Lefthanded Starting Quarterbacks in the NFL

​​Besides these six great lefthanded quarterbacks, only seven other
lefthanders have ever started more than 10 NFL games at quarterback. 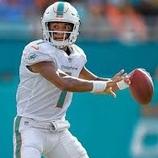 A Safe and Comfortable and Fun Place for Lefthanded People

You might also want to
visit our other websites